The international air cargo market has been on fire since last summer and the blaze is getting bigger, new figures show. The only thing dampening growth is a lack of capacity related to the severe pullback in international passenger flights.

February air shipment volumes increased 9% compared to the same month in 2019, according to data released Wednesday by the International Air Transport Association. Demand for air transport is so strong that it has returned to elevated levels last seen before the U.S.-China trade war broke out in 2018. The results were also 1.5% higher than in January, when air cargo traffic returned to positive territory, plus 1.1% over 2019, from the depths of last spring’s pandemic trough.

Cargo demand is being pulled up by the V-shaped recovery of the global economy and industrial production, roaring e-commerce sales as people spend on goods rather than services, conversion from ocean shipping where transport delays of several weeks are common, and low inventory-to-sales ratios that can mean stockouts if companies don’t use air for replenishment.

All global region report growth with the exception of Latin America

On the industrial front, the Purchasing Managers’ Index continued to show strong manufacturing output and new export orders, which are leading indicators of air cargo demand.

The blockage of the Suez Canal by a mega-ship for nearly a week last month also pushed some shippers to air to expedite delivery, which could add to volumes reported for March. All regions except Latin America saw an improvement in air cargo demand compared to pre-COVID levels, with North America and Africa the strongest performers.

IATA is using 2019 as the benchmark because 2020 numbers are severely skewed by the pandemic, which is considered a one-off event.

Many cargo owners are experiencing wait times of seven to 10 days from the time of booking to acceptance by a carrier because of the shortage of aircraft. The 15% shortfall in cargo capacity from two years ago is directly related to the stunted condition of passenger airlines, which typically provide more than half the available space for cargo in their lower holds.

The negative trend for passenger demand continued in February, with traffic down 88.7% in the all-important international segment, three points worse than in January and the worst performance since July as COVID outbreaks led to more border restrictions. Overall passenger throughput, including domestic markets, fell 75% from two years ago, IATA said.

The improvement in air cargo capacity has slowed over the past three months, as carriers halt flights in response to the lockdowns. About 40% of the widebody fleet that shippers depend on remains grounded.

The supply imbalance is happening despite a 30% increase in freighter capacity. There simply aren’t enough all-cargo aircraft to make up for thousands of lost passenger flights. 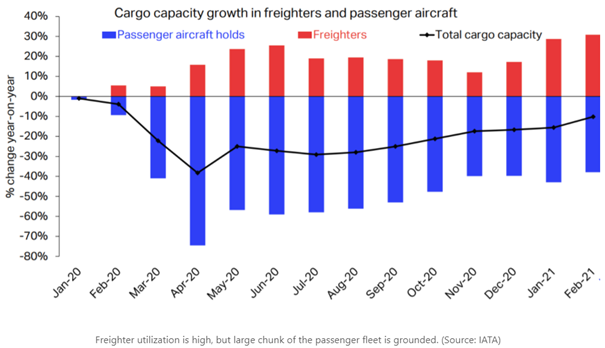 One of the strongest air cargo markets is North America, where cargo volumes have been above pre-crisis levels for months. In February, carriers in the region enjoyed a 17.4% increase in international demand driven by a 39% jump in demand on the trans-Pacific route.

Logistics companies and economists say the new round of $1,400 COVID relief checks to U.S. households could spur further e-commerce orders. The growth in demand swamped the 4.4% growth in capacity, according to IATA.

Asia-Pacific airlines experienced a 10.5% rise in cargo volumes on the back of strong export manufacturing in the region. But international capacity remains constrained in the region, down 23.6%. Airlines reported extremely high load factors of 77.4%.

Cargo volumes for Latin American carriers deteriorated further to negative 20.5% in February, despite positive activity for north Central America. The economic drivers in other parts of the world aren’t as prevalent in Latin America, and capacity is down 43%.

Passenger airlines that principally operate in large domestic markets such Australia, China and the U.S. are doing better than their peers. In those regions, seats are filled nearly 70% of the way.

Airlines are placing great hope in the busy summer travel season to help restore cash flow, but the level of bookings will depend on the progress of vaccinations and border reopening’s. Bookings are robust in the U.S. but very weak in Europe. Industry officials say global standards are needed for digital COVID test and vaccination certificates, as well as governments agreeing to accept certificates digitally.

“When constraints are relaxed or removed, there is very strong pent-up demand. That is what happened in Europe last summer and what we saw in Australia in February. So we are optimistic that as we go through the health crisis associated with the pandemic and these restrictions are relaxed or removed, we will see passenger traffic recover and recover strongly,” new IATA Director General Willie Walsh said in his first press briefing.