Tight capacity has been a reality for the airfreight market since the start of the COVID pandemic, but after months of gradual supply improvement the situation has taken a turn for the worse.

Nearly 40% of available airlift disappeared last April, but by the end of 2020 the year-over-year gap was halved as passenger airlines selectively added flights and all-cargo carriers operated more aircraft and flights.

But with a global resurgence of COVID cases and the spread of highly contagious mutant viruses, passenger airlines in January were forced to cut back international flying.

Global air cargo capacity fell 16% in the past two weeks compared to the same period a year ago, according to Accenture’s Seabury Consulting business. Capacity declined by double digits in many trade lanes, except between Asia and North America. 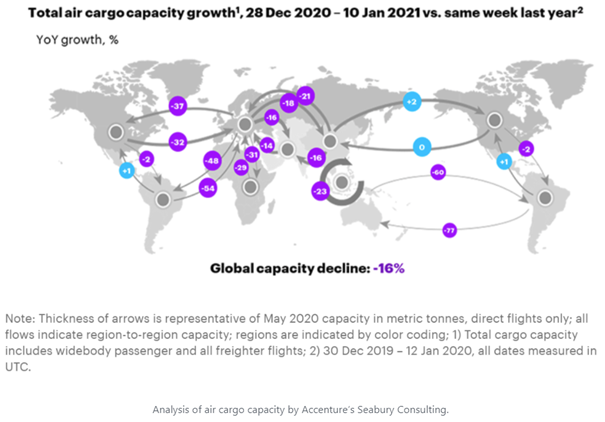 Aviation appraiser and consulting firm IBA reported a 9% drop in flight numbers across all major regions between January 11-17, with European passenger carriers dropping 16% of flights, or 10,000 trips, in the three weeks since Christmas. Even Ryanair, Europe’s busiest airline for the period, slashed capacity from 4,100 flights to 1,700 last week, a 59% drop. U.S. carriers chopped their schedules by 11%.

Since then, governments have clamped down even harder on border crossings in an effort to keep out new COVID strains from Brazil, South Africa and the U.K.

The Biden administration last week implemented a ban on non-U.S. citizens who have been in those countries, as well as much of Europe. On Friday, Air Canada and WestJet suspended service to Mexico and the Caribbean for 90 days at the request of the Canadian government.

Meanwhile, Air France KLM Martinair Cargo are continuing to operate freighter and widebody passenger-freighters even as the passenger side of Air France-KLM Group temporarily shut down because of new government travel restrictions and testing requirements for air crews.

And Cathay Pacific said it would lose a quarter of its cargo capacity because of new 14-day quarantine restrictions for locally domiciled air crews. The restrictive health measures also prompted FedEx Express to relocate Hong Kong-based crews and their families to San Francisco to ride out the crisis. It is unclear if the crew juggling will impact FedEx deliveries.

The flight reductions haven’t had a noticeable impact yet on the transpacific trade lane, with forwarder Flexport reporting capacity and demand are currently in balance. But the capacity situation is likely to change during the upcoming Chinese New Year, when carriers typically cancel freighter trips because factories close for a lengthy holiday. That could further hinder companies from using the production pause to catch up on inventory replenishment by shipping goods finished before factories close.

And shippers could find a bit less air capacity from the U.S. to Europe and the U.K. because carriers are shifting some equipment to the Latin America market to help move flowers ahead of Valentine’s Day, Flexport said in a customer update.

Getting airlift out of Europe requires use of freighters or cargo-only passenger aircraft because of the severe restrictions on passenger travel.