$200,000 a day for a boxship charter; $125m for a six-year-old, 6,865 teu vessel – the scorching container shipping sector has entered supernova territory.

S&P broking sources this week suggest a six-year-old 6,865 teu ship has been put up for sale with a price tag of $125m and a February 2022 delivery.

The ship in question is believed to be the Cape Chronos, which cost Athens-based Cape Shipping $58m when it took delivery of the ship from Hanjin Subic in the Philippines in the 2015.

Meanwhile, in the charter market previously unthinkable numbers are being banded around for prompt tonnage.

“The market is still very much two-tier, with short employment being negotiated at stratospheric figures, up to USD 200,000 per day for some ships, while the more conventional 24 month and 36 month charters are commanding significantly lower, albeit historically high, rates,” Alphaliner noted in its most recent weekly report.

Among the most eye catching deals reported has been concluded by fast growing Chinese carrier CU Lines, which has just shelled out a “whopping” $155,000 per day to take the 2,751 teu Northern Vivacity for a six-month charter, according to Alphaliner. CU Lines has grown from its domestic trading routes to take in new services to the US and Europe this year.

“Carriers should … not expect any weakening in the charter market any time soon, and are left with the choice of pricey and long-term charter commitments, or alternatively the purchase of tonnage,” analysts at Alphaliner advised this week. 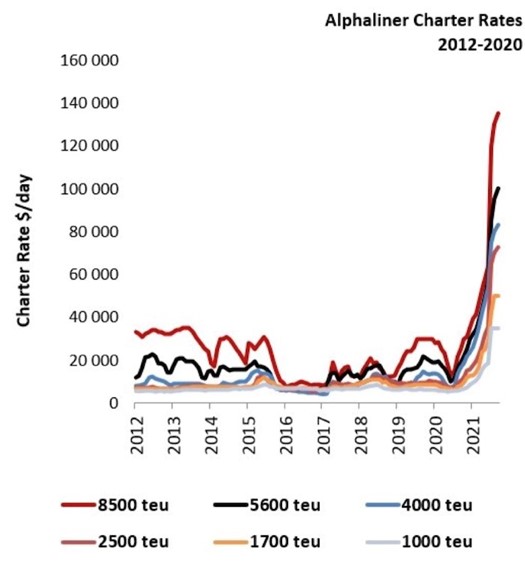 Clarkson Research Services reported last Friday that boxship charter rates have more than quadrupled from the start of this year and are 128% above the previous 2005 peak. Panamax containerships are now well over $110,000 per day compared to a low of around $6,000 a day as recently as June 2020.

Looking at the big picture, new analysis from Copenhagen-based Sea-Intelligence shows that the 11 global carriers that report their results recorded a combined EBIT of $24.5bn in the second quarter. Putting this in perspective, the 11 carriers were only able to muster a total combined EBIT of $6.9bn for the entire period from 2012 to 2020.

“All carriers recorded an EBIT/TEU of over 500 USD/TEU, meaning that at the very least, carriers made USD 500 on every TEU shipped. That level of profitability is unprecedented,” Sea-Intelligence pointed out in its latest report.

A new report from UK consultants Shipping Strategy points out that the cost of shipping a box on average has risen sevenfold this year compared to last year. The Freightos Baltic Exchange Container Index stands at over $10,000 per teu, having broken through $2,000 per teu in January this year.

“Ships that were demolition candidates a year ago are now gold mines,” the Shipping Strategy report observed.

Commenting on the latest record-breaking figures emanating from the container shipping space, Peter Sand, BIMCO’s chief shipping analyst, said : “While $200,000 a day is no market average, it shows that tonnage providers can ask for anything, and they are likely to get it, as long as freight rates remain profitable to carriers to the present extent.”

Updated data from VesselsValue supplied today (see below) show how boxships have appreciated in price this year. 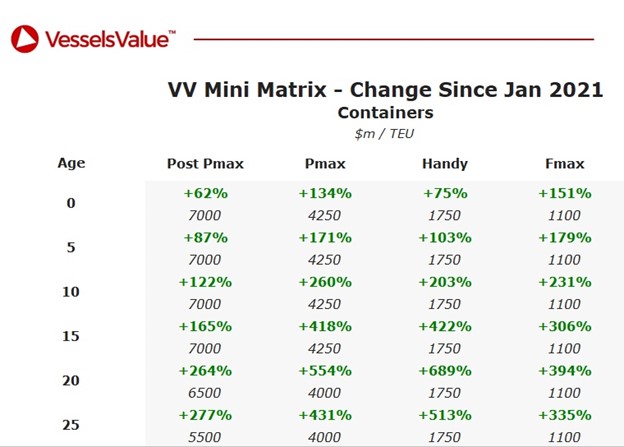