Shippers versus Carriers relations heating up

Shippers are not buying into the box shortage paradigm, that the dearth of containers in Asia is caused by the pandemic, presented by shipping lines and others, with one shipper telling Container News, “Containers don’t have a life of their own, the lines manage their box fleets as well as their ships.”

Shippers believe that the cause of the container shortage and the spike in charges is the lines themselves, “Shippers are being charged astronomic rates for the lines’ own incompetence,” said one source, adding, “It’s easy to suggest it’s a problem from the pandemic, but the lines manage their own container fleets as well as the ships.”

Growing anger among global shippers, in both the US and Europe has seen the Federal Maritime Commission (FMC) investigating charges and the box shortages in the US.

US see containers missing in the Mid-West

However, maritime consultant Mike Garratt, chairman of MDS Transmodal, which this week published a quarterly review of the container industry, argued that just by looking at the port statistics you can see that there is a problem with the view that there is a container shortage and this year there are more ‘missing’ containers than last year.

Los Angeles Port which published its figures for the first 11 months of this year showed that 4.413 million TEU entered the port, with a 3.92 million TEU exported, that means there is 493,000TEU, around 246,000 boxes somewhere in the US.

“Somewhere there is the most enormous hole with containers in it,” Garratt quipped. He added that most often it is assumed that containers end up in the mid-West for the export of animal feed, but it could also be a secondary impact of the US trade war with China, however, “This could have been anticipated,” said Garratt.

Last year a similar situation was evident, but it was not nearly as acute, with an import deficit of 390,000TEU, around 190,000 boxes in total for the full year. Port of Long Beach figures were unavailable at the time of writing.

Shippers argue that while the lines were shipping containers they must have anticipated that containers would need to come back.

Even if carriers could have anticipated the box shortages the Danish consultancy Sea-Intelligence, with CEO Alan Murphy argue that the “dire shortage” of empty containers will not be resolved until the end of January or early February as with a combination of “aggressive repositioning” and the manufacturing of new boxes this will be the quickest route to alleviate the scarcity.

According to Murphy the acute lack of boxes is the largest problem facing container shipping at this time, with particular reference to Asia, the source of a large proportion of the worlds’ manufactured goods.

“This is what is driving spot rate markets to historical highs, and it is what is causing significant grief to shippers looking to get their product moved in a timely fashion,” said Murphy.

Sea-Intelligence estimated the number of available containers and the volume of cargo moving, which allowed the consultants to predict the time necessary for a loaded container to be shipped from Asia and to make its return journey in readiness for the next cargo.

“We then augmented this with Container Trade Statistics (CTS) demand data, and the potential buffer stock of empty containers in Asia, to model the empty container availability in Asia,” explained Murphy.

Using these informed predictive estimates Sea-Intelligence was able to model four different scenarios for dealing with the box shortage, do nothing, aggressively reposition containers, an injection of newly manufactured containers and a combination of aggressive repositioning and new boxes, as seen in the graphic, below left. 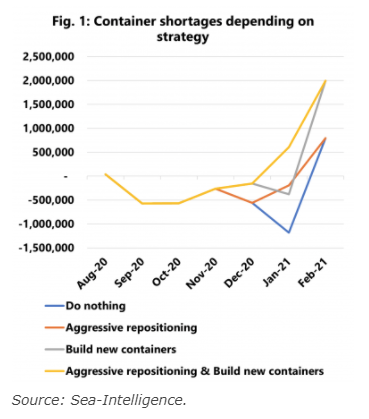 The combined strategy is the only way to resolve the issue within the end of January timeframe according to Murphy. And that is the method now being used by the carriers to reposition empty boxes. And it could be this strategy that is causing significant box shortages for back-haul cargo.

“The market is thus faced with a stark choice,” explained Murphy, “Either the carriers pursue the current strategy, and there is the possibility of resolving the container shortage during January, or the carriers reduce their aggressive repositioning strategy in order to serve back-haul shippers, but then the consequence is that the empty shortage problem will persist into at least February, and possibly beyond.”

This is not a scenario that James Hookham, the secretary general at the Global Shippers’ Forum (GSF) recognises, “I’m not so sure the shortages are as acute as they say,” he argued.

The GSF and consultants MDS Transmodal released a quarterly review of the container shipping market this week, which included assessing the numbers of containers in and out of ports and the evidence given by shippers, and the swift returns of empty containers are in the interests of the shippers, said Hookham, “No-one is hanging about,” he added.

xChange claims lockdowns in Q1 & Q2 disrupted the supply chain
He went to say, “There is a spike in demand in certain trades, but global trade is not much different to last year and there were no shortages then.”

European shippers remain sceptical, with the Policy Manager for Maritime Transport at the European Shippers Council Jordi Espin arguing, “To us, this issue responds to what we call ‘grey containers’ which is repositioning empty containers not to where they are needed but to where there are high freight rates established.

This may create an artificial view of relocating containers still far away from where the operational world is demanding them. The supporting policy to this is only more and more profits.”

Espin offers a solution, “There is an easier way of repositioning containers: shipping lines should offer empty containers to shippers under the “shippers’ own” mode. This would relocate containers exactly where the shippers’ demand needs them and would establish an exact pattern of what the operational world flows are demanding. But this latter solution needs a driven customer focus [from the shipping lines], which seems not to be the case now.”

Worldwide Logistics is reporting most of the major container ports in China have a shortage of containers, across all the lines. In addition all the lines have experienced shortages of containers in Thailand, South Korea, Singapore and Malaysia.

Jon Monroe, of Worlwide Logistics and an independent consultant, lists these further problems that must be overcome by the industry in the US.

These additional challenges to the industry and the criticisms levelled at the carriers by their customers was addressed by the lines through John Butler, President & CEO of World Shipping Council, which represents 20 of the world’s vessel operators.

Butler argues that the assumptions by shippers are false, in the first instance the assumption, “That carriers control demand for transportation services and therefore how many boxes move in each direction, and that carriers have sole control over their equipment.

Both assumptions are incorrect. On the first point, import and export numbers, and their effects on intermodal equipment, are driven by cargo demand. Carriers respond to that demand by deploying their vessels and containers to best serve the cargo that is tendered to them. That is what carriers are doing today.

“On the second point, the entire model of containerised transport is that a loaded box can be handed off among multiple actors in the intermodal chain without being unloaded and re-packed at each step.

That means that the velocity of the container is affected by marine terminal operations, trucking companies, cargo owners, and others. Carriers do not control the manner in which these third parties work.”

As an example, Butler said if a shipper parks a loaded container and chassis in a depot for 10 days, both the container and the chassis are unavailable to carry other cargo.

“The actions of all participants in the supply chain affect every other participant in the chain. It is this reality that defines the management challenge that we collectively face – not a simplistic approach that incorrectly suggests that one participant controls the entire process,” concluded Butler.