In virtually any ocean shipping market, a big jump in newbuilding orders is a headwind for future freight rates. More capacity spread among competing owners strengthens the negotiating hand of cargo shippers.
According to Alphaliner, container-ship orders spiked in Q4 2020. Orders totaled to 673,500 twenty-foot equivalent units (TEUs), the highest quarterly tally since Q3 2015.

That’s a big jump and cargo shippers may hope for rate relief when those newbuilds eventually hit the water. But they probably won’t get it. The ultra-consolidated liner sector proved in 2020 that it can manage capacity downward in periods of low demand. Container-vessel supply — unlike tanker and dry bulk vessel supply — is not the total number of ships on the water. It’s the number of ships liners place in scheduled service.

Liners generally own around half their ships and charter the rest from so-called non-operating owners (NOOs). If there is not enough demand to fill recently ordered ships when they arrive in 2023, liners can reduce capacity in service. They can let charters from NOOs expire and temporarily lay up their own vessels.

The container-ship orderbook means a lot less to cargo shippers than it did before liners achieved capacity management. Furthermore, the recent rise in orders is not as substantial as it may seem.
According to Alphaliner, owners ordered 98 container ships in 2020 with an aggregate capacity of 1 million (TEUs). Most of the Q4 2020 orders were “megamaxes,” ships with capacity of over 18,000 TEUs and 23-24 container rows on deck.
“These are orders we had already expected for a long time,” said Stefan Verberckmoes, shipping analyst and Europe editor at Alphaliner, in an interview with American Shipper. “They were mainly from carriers like Hapag-Lloyd and ONE that didn’t have megamax vessels 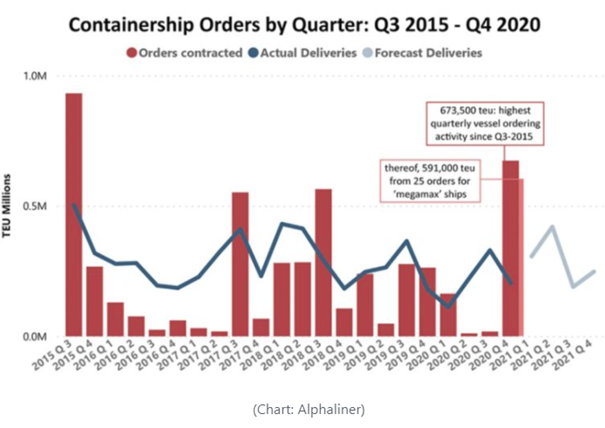 “I absolutely don’t believe the order surge was a reaction to these big volumes,” he continued. “They were planned to happen anyway in the first quarter of this year. The reason they were ordered in the fourth quarter could be that they were negotiated a little bit faster so yards could include them in their figures for 2020.

“The lines are absolutely not over-ordering,” he emphasized. “Hapag-Lloyd hadn’t ordered ships in five years. MSC is going along with its regular expansion.”
To put 2020 newbuild contracts in context, the orderbook capacity represented 10.4% of the on-the-water fleet at the end of 2020. That share is unchanged from the end of 2019 — and far below earlier highs. That ratio was over 60% in 2008 and over 20% as recently as 2016.

Before rebounding in Q4 2020, the container-ship orderbook sank to 9.4% of the operating fleet in the middle of last year, the lowest level in two decades.

Uncertainty over anticipated decarbonization rules is one reason for the newbuild shortfall. Carriers don’t want to order vessels with propulsion and ship designs that become prematurely obsolete due to future regulation. Lack of economic visibility is another reason. This hurdle implies that the Q4 2020 spike does not presage a year of heavy megamax ordering in 2021 — because visibility has not improved.

According to Verberckmoes, “The carriers say, ‘The current boom we are seeing will end at a certain moment.’ But they don’t know whether it will be in April or June or September. They don’t have any visibility on this. So, they remain careful.” In general, he explained, “Carriers have to consider how many new ships they think they will need. The problem is that it is a couple of years between ordering a ship and taking delivery and it’s difficult to know what will happen.

Q4 container vessels orders are 58% of the yearly 2020 totals

“Carriers can have a view on how many ships they want in two years’ time. But my impression is that liner shipping has mostly come down to crisis management. There’s an increase in volume that carriers didn’t see coming, which is what’s happening now.

Or there is a terrible mess and carriers manage capacity. That [crisis management] is a different thing compared to the question of how many ships carriers need in the long term.”

There was one glaring gap in the 2020 ordering activity, noted Verberckmoes. “It has been a year in when very big ships and very small ships were ordered, but almost nothing in between, which is very strange.” On the big-ship side of the equation, owners ordered 25 megamaxes in Q4 2020 totaling 591,000 TEUs. That represented 58% of the annual total. There were also ships in the 12,000- to 13,000-TEU size category ordered in Q4 2020 by Seaspan, an NOO owned by Atlas (NYSE: ATCO), and Evangelos Marinakis’ Capital Management. In addition, OOCL ordered five megamaxes back in March.

Virtually all of the other ships owners ordered this year were small feeder vessels with capacity of under 2,500 TEUs for intra-Asia trades. The only midsize ships ordered were two 5,980-TEU vessels for CMB.

This gap could lead to more ordering of midsize vessels this year.  NOOs, more so than liners, could be the biggest source of these orders. This is particularly important to stock investors, because most U.S.-listed container-shipping stocks are NOOs.
“What I’m most curious about this year is whether the NOOs — companies like Seaspan and Danaos and Costamare — start ordering ships on a speculative basis,” said Verberckmoes.

“These are typically the kind of companies that would order midsize ships and not megamaxes unless they had long-term charters. “But even though they are making big money now because there’s a shortage of ships, nobody knows how long this will last. [Like the liners] they also have low visibility on what will happen. And remember, the NOOs are coming back from a situation where they had to charter ships on a loss basis or even lay them up.”

The problem today is under capacity not overcapacity, but that will change at some point as the cycle turns. And in the long term, NOOs face greater risk than liners in any future overcapacity scenario.

If liners can maintain the capacity discipline they displayed in 2020 — and if regulators don’t intervene — cargo shippers’ rates would not necessarily decline due to excess future vessel supply because liners could slash scheduled services in parallel with demand. In contrast, NOOs would suffer a major hit because charter demand would plunge.