May has reported 2.72 million TEU taken out of service

The analyst Alphaliner says though that it believes shipping lines may have overestimated the severity of the demand contraction in May.

Globally, the inactive container shipping fleet has reached an all-time high of 11.6% of the fleet in capacity terms at the end of May, according to analyst Alphaliner.

The idle containership fleet stood at 2.72m teu as of 25 May, or 11.6% of capacity, due to a combination of blank sailings to mitigate the impact of lower demand from the Covid-19 pandemic and vessels taken out of service for scrubber retrofits.

Maersk and MSC heading the pack of anchored vessels

Part of the cause for the record-high levels are scrubber retrofits. Many lines have removed ships from service to install equipment that “scrubs” harmful sulfur particles from ship exhaust in lieu of burning low-sulfur fuel to comply with new shipping regulations.

According to Alphaliner’s weekly newsletter the world’s two largest container lines – Maersk and MSC – account for the largest portion of the idle fleet with a combined total of 845,000 teu out of service.

HMM though has the highest percentage of its fleet inactive – almost a third at 32.9%. 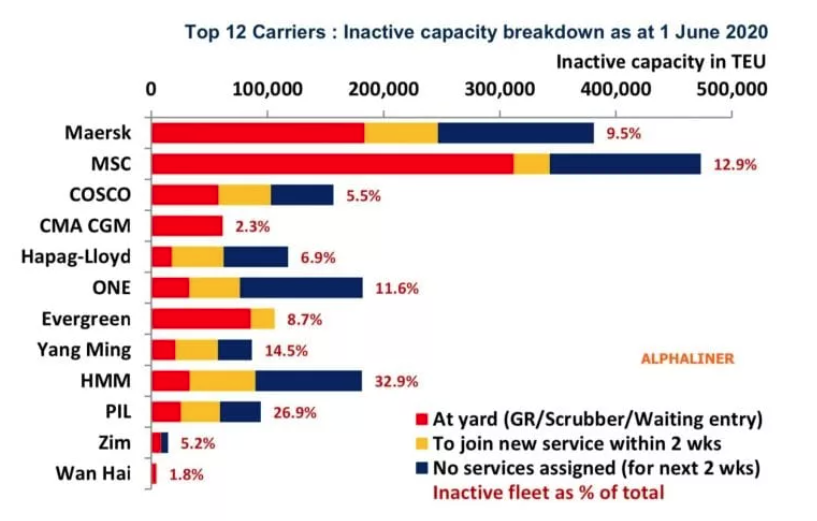 Alphaliner says that it believes shipping lines may have overestimated the severity of the demand contraction in May.

Alphaliner said it expected the inactive fleet to peak shortly as lockdowns in many countries start to ease and demand recovers. “There are encouraging signs that carriers have over-estimated the level of demand contraction in May, and capacity shortages on certain routes have already started to push spot freight rates up.”